In October, 2019 I went on a five-days’-long walk through the city of Rome to observe its great Renaissance and Baroque buildings and urban designs. This is the first of a series of blog posts from my walk. This post is my introductory observations about the city; the next posts will be devoted to specific piazzas and buildings, with photos and a few drawings.

There’s a power struggle going on across Europe these days. A few cities are competing against each other to see who shall emerge as the great 21st century European metropolis….They all strive to outdo one another culturally, architecturally, politically, fiscally. …But Rome, it should be said, has not bothered to join the race for status. Rome doesn’t compete. Rome just watches all the fussing and striving, completely unfazed. I am inspired by the regal self-assurance of this city, so grounded and rounded, so amused and monumental, knowing she is held securely in the palm of history. 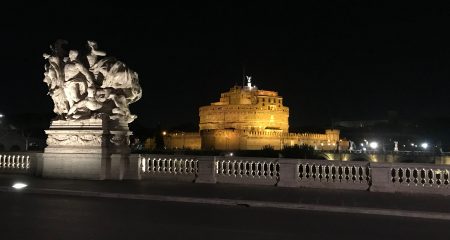 London and Paris are river cities. In each of them the king built his palace on the river bank, and the great cathedral also overlooks the river. The two cities expanded outward from both river banks, and while each city had a preferred side of the river, today both sides of both cities’ rivers are highly desirable and full of sights to see. While Rome also is on a river, quickly its early settlements were on hilltops, and over the past 2200 years almost all of its major buildings and spaces were built away from its river and on one side of it. Were it not for the need to see St Peter’s Basilica and the Sistine Chapel a tourist could have a complete visit to Rome without crossing a bridge and scarcely seeing the Tiber River.

Nonetheless, water contributes greatly to the unique character of Rome⎯in the form of fountains. In ancient Rome clean water was brought to the city via eleven aqueducts. Much of that water was piped to public fountains to serve as the source of potable water for the populace. To this day one can scarcely walk more than three blocks in Rome without encountering a functioning public fountain.  The fountains range from small, solely functional bubblers up to great basins that are the focal points of the piazzas, and are enriched by large, classical limestone sculptures of seemingly every Western deity of a water source or river. Even today, one of the ancient aqueducts remains in use supplying the city’s most famous fountains. 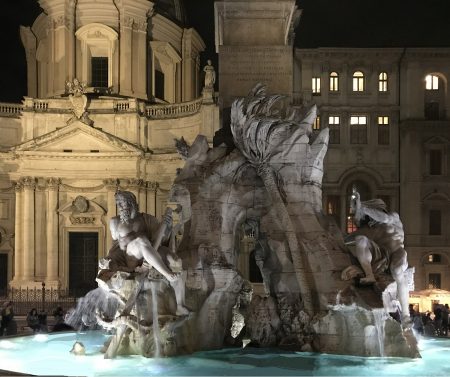 Rome has been the center of a single religion for 1800 years. The Catholic religion, and before it, ancient Roman beliefs, express themselves on seemingly every block of the city, and the successive waves of religious styles⎯classical, Romanesque, Gothic (such as it exists in Rome), early Renaissance, High Renaissance, Mannerist, Baroque, Rococo, and Neo-Classical⎯have made Rome a built library unique in the world of the ways in which the Western world has expressed its aspiration to the divine.Another difference: architecturally, London fell in love with the classical, refined Palladian Revival style ✙ and almost never let go. And yet, it is also true that a great deal of London’s cityscape has been remade every few decades. Today, ✙  enormous, utterly contemporary monoliths of steel and glass poke between sober Palladian Revival and occasional agitated ✙ Decorated or Perpendicular Gothic Revival buildings. In most of London you can spot a steel and glass tower.

One of the West’s first urban designers, John Nash, created ✙ Regent Street in London in the 1820’s by tearing up the existing medieval layout of narrow streets in the area and replacing them with a broad, graceful street lined by buildings with unified facades. The impact of Regent Street was great, and led in part to Louis Napoleon in 1854 hiring Baron Georges-Eugène Haussmann to do the same on a grand scale to the crowded, sewage- and illness-filled medieval city of Paris. Haussmann tore down 10,000 medieval buildings, ✙ ran broad boulevards through the city with a functional, piped sewage system installed beneath them, and created  23 parks, which transformed Paris into a sun-filled, spacious, formal, and somewhat intimidating place. These qualities remain, even as Paris continues to change.

Today it is ringed by ✙ the grimmest of mid-rise apartment buildings that house all who would once have lived in the city’s vanished inner slums, who cannot afford to live in the remade City of Light. The tall, late-20th-century buildings that house them today ✙ glower around the edges of the city. 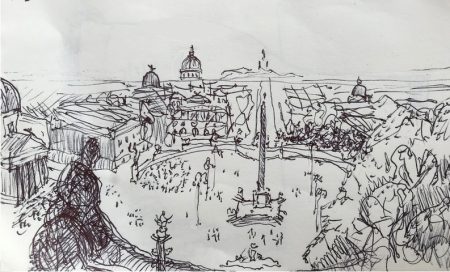 Piazza del Popolo, viewed from the Pincion Terrace, and now mercifully no longer a parking lot. The dome of the Basilica of St. Peter visible above the horizon.

But no one in the modern era drove grand new streets through central Rome (save one single short street by Mussolini). Nor does central Rome have a trace of the modern in its architecture⎯no skyscrapers, no large sheets of glass alternating with bands of steel. No signs of the worst of the modern world⎼no alienating, dreary, 20-story apartment buildings visible. And miraculously, today none of its major public spaces is a parking lot. Instead, it remains just a series of hills; once seven, since enlarged to include a few more, over which is draped a fabric of old, old buildings. ✙  Newer ones attract no attention to ✙ themselves.

And then laid over this fabric is a translucent web woven of symbol and memory.

Central Rome is missing the two great disrupters of memory in Western architecture⎼the Gothic and the Modern. So, in this city each new wave of buildings functions as a refinement of what had come before⎼that is to say, each is inherently an exercise in memory. The nature of the classical vocabulary that composes every inch of central Rome is symbolic: each element symbolizes something else. This phenomenon is especially thick in Rome where the popes, cardinals, and powerful families ✙ inserted their family crests on the building they had made, or remodeled, and each wave of Christian theology declared itself through its own sets of symbols that were inscribed throughout buildings and the streetscape. Rarely did the newly inscribed memories and symbols fully supplant the prior ones; rather, over the centuries the fabric of the city became richer and more complex.BLACK

Paris was remade in the mid-19th century as I said. London was bombed into ruins in the mid-20th century and then built anew. But not Rome. Even in the 21st century Rome remains a city of celebrated ancient ruins overlaid with work of the High Renaissance and the Baroque. Even the inevitable late 20th-century apartment buildings west of the Tiber River have a height limit of just six stories or so which hides them behind hills.So, Rome has a completely different urban character than the other great cities of Western Europe and the British Isles.

It is its own city.

It has a contemporary business district, but, mercifully, it is completely concealed from the historic city. In this way I think Elizabeth Gilbert had it exactly right in the second paragraph of the quote above.

The great buildings of Venice ✙  are overwhelmingly Gothic in style. Florence, ✙ early Renaissance. London is stamped by ✙  the Palladian Revival. Paris, ✙ by the Second Empire and Beaux-Arts styles of the 19th century. ✙ Rome, other than its precious ancient ruins, shines with the High Renaissance and Baroque.

In earlier, brief visits to Rome I concentrated on the remnants of its ancient structures. On this visit I would focus on its High Renaissance and Baroque work.

Today I devote my career to the revival of an ancient system of natural-law-based architecture known (after its reviver) as Maharishi Vastu®️ architecture. Among its patterns are symmetry and an appreciation of the classical vocabulary. The buildings of Rome will provide much inspiration to us.

This is my aide-mémoire of the visual feast of a five-days-long walk through Rome in October of 2019.